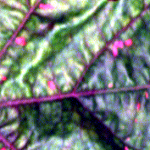 The technique developed and introduced here is also applicable for the analysis of hyperspectral images. Again, the complete information of one spectrum is used within the fitted model, but for each pixel this time. Contrary to classification with respect to the experimental design with known classes the situation varies within the image situation, as all continuous steps of one factor are somehow depicted here. Consequently we use a cluster analysis instead of the discriminant analysis. The cluster analysis does not require a beforehand classification. The downy mildew, (Plasmopara viticola)) experiment is chosen again as an example1. Parallel to infected leaf measurements with the plant probe, hyperspectral images have been taken by a line scan camera. The RGB image (right) depicts the upper side of a leaf. It tests the question how pathogen related pattern of the lower side of the leaf are detectable on the top side based on hyperspectral information. To test the hypothesis the problem is partitioned in several steps after model fitting. 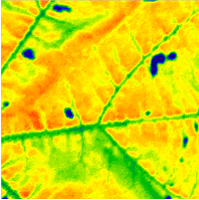 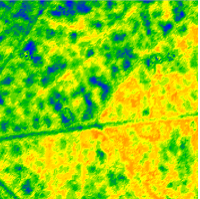 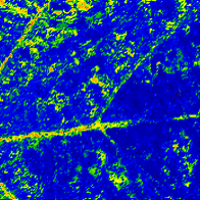 The parameters describing the relative position on the y-axis, image the origin very well (left), other parameters are important by its physiological meaning(center), and further parameters of the model show a weak conformity with the RGB image.

Density estimation of Heterodera schachtii with hyperspectral signal from canopies, ca. 3 MB, (in German only)

To test the developed index we used a camera image of the company Cubert 2 taken from a sugar beet field of the JKI Elsdorf. The scientific background was to test the ability of density estimation of the sugar beet nematode based on the hyperspectral information of the sugar beet canopy. The data were part of the a Nemaplot Kai Schmidt initiated and EU-funded project and were taken at the JKI Elsdorf. The report (German only) can be downloaded from the link on the right. The report explains the background of typical, nematode related spectra for the nematode problem. To explain the picture below, the population density of nematodes is usually estimated from extremely laborious soil samples, means, the spatial distribution in field situations of the worm is known, on smaller scales the density is based on one or two soil samples and nothing is known about the distribution.
The cluster analysis with predetermined 8 clusters resulted in such a distribution shown in the figure left. Cluster color is set to a spectral standard from blue to red. The first 5 clusters describe the general background, they determine the white standards (blue) up to the bare soil of the paths (green to yellow). The missing plant at the position 20;18 is clearly detectable. Much more interesting are the clusters 6 to 8, as they present the factor nematode population. The resulting pattern apparently shows different nematode densities, at least the spatial distribution is exactly how nematode population behave. Therefore the single cluster are worked out in more detail.
Cluster 7 plus the 95% confidence bands: the variance is high as usual, but no outlier in the visible domains at 580 to 700 nm. Based on the structure of the signature of cluster 7 it is assumed the cluster represent nematode free areas (or below threshold densities) of the plot.
The signals of cluster 8 (with confidence bands) describe the high density areas of up to 4000 E&L/100 ml soil. The conclusion is drawn from both, the relative position compared to cluster 7 and the increased variance in the domains of 580 to 700 nm. The higher reflectance in the visible wavelengths and lower reflectance in the infrared range indicate the nematode effect.
Cluster 6, again compared to the position of cluster 7. We find high outliers in the domains of 580 to 700 nm. Part of Cluster 6 are spectra which are more typical for response to leaf pathogens. But it is not entirely clear, parts of the variance could be related to the bare soil of the paths. Nevertheless, nematode densities in the range of 600 - 1500 E&L/100 ml soil causes the pattern of cluster 6.
To give some kind of testing of the conclusions above, we compare the hyperspectral signatures of the image (plot) with the ASD FieldSpec signatures. The signature pattern also show a larger variance in the domains of 580 to 700 nm, which are related to higher nematode densities (blue and green areas).

Conclusion: The combination of aerial information and the confidence areas of the spectra allow some kind of conclusion about the underlying nematode population, or, more theoretically, it links the more abstract clusters more or less with the scientific hypothesis of the experiment.

Nemaplot uses cookies to provide its services. By continuing to browse the site you are agreeing to our use of cookies. More information (in German only)