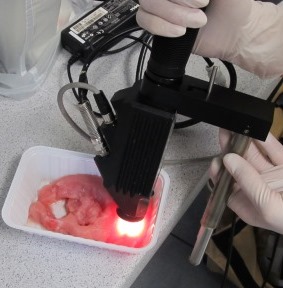 Is it possible to address the quality or freshness of cutlets by hyperspectral signals. To define the dynamics of decay processes of fresh meat low fat cutlets were The decay fate of pork chops stored at 4°C was monitored for two weeks. The meat was taken directly from the production line and instantly prepared for further analysis and storage in the lab. Total viable counts (TVC) values were determined from perforated meat blocks on different days after delivery. In total the complete procedure was repeated nine times, while the number of backs per delivery varied from 2 to 11, resulting in 9 time courses of decay observations with related repetitions. Contemporary to the standard sampling the meat was scanned by the hyperspectral sensor including the contact probe. The contact probe provides an undisturbed reflectance signal using an internal light source. The spectral measurements were taken on the same day as the lab measurements. The hyperspectral signature shows a distinctive pattern at day 0 which characterises the type of meat and its current condition. These signatures vary with time while changes occur mainly in the visible domains. The measurements were repeated several times, the following figure depict the means of the complete experiment.

The figure right compares the dynamics of both the TVC values and the canonical distances. The time courses demonstrate the relative differences of both procedures to address meat quality or conditions. While the time courses of the TVC values follow the well known sigmoidal functions, a hyperbolical pattern is noticed for the canonical distance. Two days of storage at 4°C we can distinguish a time effect by the canonical distance, at day 5 the changes approaches the saturation levels, while the TVC is in the middle of the exponential period. The correlation between optical changes and bacteria growth include a time shift. For the early changes simple oxidation processes are assumed to be the reason, followed by advances of exponential bacteria growth.
Continue to optical properties of different meat types

1Data taken as part of an experiment of the ITW, Cold Chain Management, PD Dr. Judith Kreyenschmidt, University of Bonn

Back to NIRS data analysis Continue to general recommendations

Nemaplot uses cookies to provide its services. By continuing to browse the site you are agreeing to our use of cookies. More information (in German only)